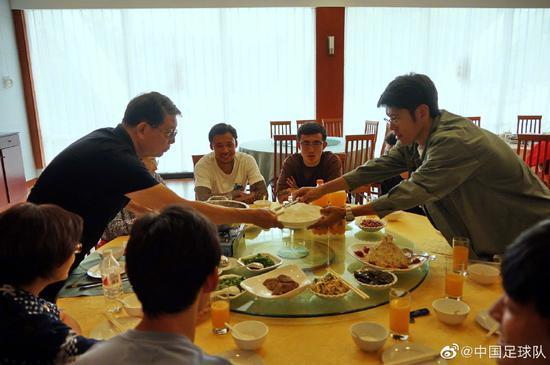 On the night of October 1, the cool autumn breeze gently blew over the Chongming Genbao football base. 61 young football players, more than 40 coaches and base staff gathered on the turf and sang loudly. This day is also the 13th birthday of the base twins Zhang Gejiaqi and Zhang Gejiahao. Birthday cakes, signature fried noodles with Mid-Autumn moon cakes, Xu Genbao, Fan Zhiyi, and other coaches and staff from Genbao base collectively celebrate the "warm big family" National Day and Mid-Autumn Festival.

As the head of the base, Xu Genbao also raised expectations for these young football players: "The next double festival will be celebrated in 11 years, 2031. At that time, you were 23 or 24 years old, which is the best age for football players. , I hope you can play in the Super League club, and you must work hard to enter the Chinese national team and win glory for the motherland."

In 2000, Xu Genbao came to Chongming alone, ploughing his dream of "Manchester United in China" on a hundred acres of wasteland. Over the past 20 years, the former hot spot where machine guns can’t be swept out at night has cultivated 13 international players including Wu Lei, Yan Junling and Zhang Linpeng, and sent more than 50 fighters to the Super League club.

On July 7 this year, the base has celebrated its 20th birthday, and the base chanted the slogan "Twenty Years of Sharpening the Sword and Departing Now". Today, 61 young players from the three age groups of 2006, 2007, and 2008 are welcome in the base. They are willing to follow in the footsteps of Wu Lei and other seniors and pursue their football dreams. These young football players also need to understand, respect and integrate into the traditional culture of the base.

Wang Shenchao, the international footballer who walked out of the base and now plays for SIPG, once said, “When I was studying at Chongming Base, even if our family was in downtown Shanghai, we stayed at the base like the Mid-Autumn Festival, and the whole team spent time together. Being a family makes us feel deeper and united, and we can better meet challenges together on the court."

Starting with Wu Lei and Yan Junling in the first phase of Genbao Base, it has become a habit to spend the Mid-Autumn Festival collectively. This year coincides with the National Day and Mid-Autumn Festival. Xu Genbao also used Wu Lei, Yan Junling and other international football players as examples to motivate the team members. "Wu Lei, Zhang Linpeng, etc., they all work hard first and then reap the rewards. Now is the time to learn skills. , You must strive for progress and have the ideals and beliefs to serve the Chinese national team and win glory for the motherland."

Xu Genbao's eldest disciple Fan Zhiyi, now serves as the youth training director of Genbao base. Before celebrating the double festival party for the young players to perform their singing and dancing talents, he especially used his personal experience to inspire the juniors who were only 12 or 13 years old.

"Please believe that there will always be rewards for your efforts. I was 17 years old with Director Xu. He selected me from the Shanghai Youth Team and entered the second national team. He gave me skills and details. At the beginning, our team did not perform very well. The pressure of Xu's guidance is also great. But we did not give up our efforts. In 1988, we won the league runner-up. In 1989, Xu's guidance took our national second team to the league championship." Fan Zhiyi said that the emotion was a little choked. The starting point of the players is very high, but here, Ken will encounter unsatisfactory distress and will feel uncomfortable. In the face of difficulties, I hope you can stick to it. Everything depends on persisting."

Fan Zhiyi also hopes that more good seedlings will emerge from the current base, "I was not cultivated by the base, but I was guided by Xu, and I want to thank Master. In 20 years, the base has produced batches of talents. Now it’s your turn for teenagers. I hope that through your hard work, you can play for the Super League professional club and realize your dreams in the near future. This is also to win honor for your parents and the base."

At the end of the double-festival party at the base, the three echelons jointly gave the coaching staff and base staff a gift. In the singing of "Listen to me thank you", the team members expressed their gratitude collectively: "I will give you a heart, a flower, you are in my life, so touched; you are my angel, all the way Guide me, no matter what the years change, love you sing into a song. Listen to me thank you, because of you, warm the four seasons; thank you, thank you, the world is more beautiful; I want to thank you, because of you, love is always there From the bottom of my heart; thank you, thank you for passing happiness..."

This song that fits well with the artistic conception drew waves of applause, and even many base staff were moved to tears. At the end of the song, the teenagers also bowed and thanked Xu Genbao, the head of the base. In response to this, Xu Genbao waved his hand: "Don't thank you for now, I will thank you when you are successful!"

Genbao base soldiers celebrated the double festival collectively. The live performances were rich and colorful, and the team members also showed outstanding literary talent. In addition to the three echelons singing cantatas, there are also various programs such as fancy ball game performances and martial arts routines.

Xu Genbao took the video and sent it to Wu Lei, who is as far away as Spain. Wu Lei’s WeChat reply also revealed shock: “The children know so much more than we did at the time. Times are really different, maybe we I'm old." At the end of the text, Wu Lei also used a mischievous smile.

Xu Genbao told reporters that it has become a tradition for the base to collectively celebrate the Mid-Autumn Festival. There are three starting points for doing so. "The first is to tell the young players that if you want to be professional players in the future, there is no vacation. When I play football, I go to Guangzhou and Kunming for winter training, and I will spend the New Year away from home. Football is our profession, and when others are resting , We have to train hard and show off exciting games for the society."

Xu Genbao told reporters that during the Mid-Autumn Festival as a group, he also hopes that the children will establish the concept of making the base home. "The coaches and staff of the base will always be with them just like their parents. The young players must practice their skills in the base and realize their dreams. Achieve the goal." Xu Genbao's rule is naturally supported by successful cases. Wu Lei and Yan Junling all came here like this.

The Mid-Autumn Festival this year coincides with the National Day. Xu Genbao said that every festival will give young players patriotism education, and the best patriotism of football players is to train the game hard and establish the concept of winning glory for the country.

Xu Genbao has designed a blueprint for these small players in 11 years: "The next National Day and Mid-Autumn Festival will be the same. It will be 2031 11 years later. At that time, you were 24 years old and football was at its best. I hope you At that time, you will not only be able to play in the Chinese Super League, but also strive to play for the Chinese national team. I hope you can become better players than Wu Lei and better than Wang Shenchao and Zhang Linpeng in 2031. You must train hard to help China. Football goes out of Asia and wins glory for the country!"